Queen Elizabeth I was the fifth and final monarch of the Tudor dynasty. She was the daughter of Henry VIII through his second marriage to Anne Boleyn, who was executed when Elizabeth was two years old.

In 1558, when Elizabeth was twenty-five, her sister, Mary, died and she ascended to the throne. Elizabeth was childless throughout her life, but she became a godmother to over a hundred children in her court. One of these godsons was John Harington.

John Harington is one of the great, unsung heroes of history. He invented the flush toilet,an invention that affects our lives as much as Edison’s light bulb or the Wright brothers’ airplane. Most of us thank him every morning. 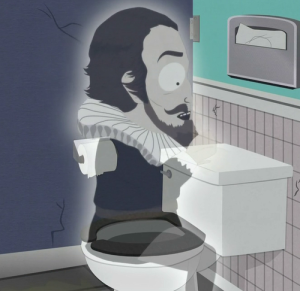 Harington had a mixed reputation in the Queen Elizabeth’s court. He was free-spoken, and his poems from an early age caught the Queen’s attention. She encouraged his writing, but discouraged his habit of spreading risqué texts among the ladies of the court.

When Harington was in his early twenties, Queen Elizabeth caught him distributing a racy poem by 16th century Italian poet Ludovico Ariosto. Queen Elizabeth was livid with her godson—and her punishment was a memorable one.

The Queen banished Harington from the court until he had completed his punishment: a translation of Ariosto’s notoriously long epic poem, Orlando Furioso, into English. (All 38,736 lines. About 1,676 pages.) Harington finished his translation in 1591. (By now Harington was 31.) His translation of the epic poem was the first  into English, and the only one until 1757. It was widely praised, and is still read today.

Five years later, John Harington invented the flush toilet. Three years after that, for his services during a military campaign in Ireland, he was knighted. He died Sir John Harington in 1612 at the age of fifty one.

3 thoughts on “A Most Cruel and Unusual Punishment”