Ursula K. Le Guin was born Ursula Kroeber on October 21st, 1929. She was the youngest child of anthropologists Alfred L. Kroeber and Theodora Kroeber. She grew up in Berkeley, California—where her father was a professor at the University of California.

Le Guin showed interest in writing at an early age. She wrote her first fantasy story at nine years old, and submitted her first science fiction story for publication (to Astounding Science Fiction) at eleven.

Le Guin graduated from Berkeley High School in 1947; she was a classmate of fellow science fiction novelist Philip K. Dick. Shortly after, she moved to Cambridge, Massachusetts to study Renaissance French and Italian literature at Radcliffe College (Harvard). She received her B.A., Phi Beta Kappa, in 1951 and her M.A. from Columbia University in 1952. Soon after, Le Guin began her Ph.D—focusing her doctoral studies on the poet Jean Lemaire de Belges.

In 1953, Le Guin was awarded a Fulbright Fellowship to continue her studies in France. In France she met her future husband, historian Charles Le Guin. Shortly after their marriage, Le Guin discontinued her doctoral studies and followed her husband to Emory University—where he was finishing his Ph.D. Le Guin began teaching French at the university level.

Following her first rejection from Astounding Science Fiction at age 11, Le Guin continued to write. But she did not attempt to publish again for ten years. From 1951 to 1961 Le Guin wrote five novels, all of which were rejected by publishers—her stories being deemed “inaccessible.”

Ursula K. Le Guin would not publish her first short story until 1961. It would be another couple of years before her work would see regular publication. In 1966 Le Guin published her first novel: Rocannon’s World. She was thirty-seven years old. 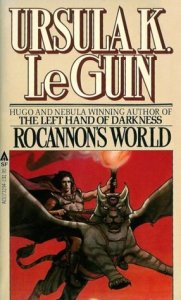 Le Guin has won dozens of literary awards, including four Nebulas, two Hugos, and a National Book Award. Her short story collection, Unlocking the Air and Other Short Stories was a finalist for the 1997 Pulitzer Prize for Fiction.

In 2003, the Science Fiction and Fantasy Writers of America made Ursula K. Le Guin their 20th Grand Master—immortalizing her name alongside such legends as Heinlein, Asimov, and Clarke. In 2014, Le Guin was awarded the Medal for Distinguished Contribution to American Letters by the National Book Foundation.

Le Guin’s writing has inspired numerous authors—from Salman Rushdie, to George R.R. Martin, to Neil Gaiman, to David Mitchell. (All of whom are unanimously grateful for the accessibility of her books.)

Few authors have achieved the widespread renown of Ursula K. Le Guin. But I wonder how many aspiring writers know her origin story—how many know about the young woman in her 20s and 30s who struggled to publish her first five novels?

The world was a different place in 1966—England were World Cup champions, humans hadn’t walked on the moon, and Ursula K. Le Guin, age 37, had yet to publish her first novel.

It would have been easy—even logical—for Le Guin to give up on writing. But against all odds she persevered. Almost a half century later, the world of literature is better because of her decision to keep going.