After three hours of deliberation, the panel of judges was finally ready to make the announcement. Chair judge A.C. Grayling stepped up to the microphone and cleared his throat. The room went silent.

“I must, again, praise my fellow judges for the superhuman efforts that went into this struggle—and a struggle it was. But it produced a winner. And that winner, of this year’s Man Booker Prize for fiction is…”An agonizing pause. “…The Narrow Road to the Deep North, by Richard Flanagan.”

As applause filled the room, the Tasmanian novelist stepped up to the stage to accept his prize. A look of bewilderment was streaked across his face. The Narrow Road to the Deep North is Flanagan’s sixth published novel, and his eleventh book. The novel is a love story wrapped in a war story—broadly based on the unspeakable horrors faced by Flanagan’s father: a prisoner of war on the Burma Death Railway.

Flanagan’s novel was written over the course of twelve years—beginning on the back of beer coasters in a Sydney pub.

Richard Flanagan was born in 1961 in Longsford, Tasmania. He was the fifth of six children born to Archie Flanagan and Helen Leary—descendants of Irish convicts brought to Tasmania during the Great Famine. Flanagan was raised in the remote mining town of Rosebery, on the west coast of the island.

Richard’s older brother Martin, a writer and journalist himself, remembers nearly drowning his younger brother when he was eleven years old. Martin recalls that he and Tim, another brother, dared young Richard to swim the length of the mouth of the Forth River and back. He did. As he came back to the riverbank, where his brothers were seated, he proudly announced to them, “I did it.”

“Did what?” they asked him.

So Richard swam it again. And, again, his brothers claimed not to have seen him. So he swam it again. And again—until, as his brother writes, “in the end he was just a set of quivering nostrils and two flailing hands above the water. It almost makes me emotional to remember it.”

Flanagan attended the University of Tasmania, where he was president of the University Union. He graduated with a B.A., first class honors, in 1983. The following year, he was awarded a Rhodes Scholarship to Worcester College, Oxford.

At Oxford, Flanagan competed against Cambridge as a canoeist—earning a varsity blue. He graduated with an M.Phil in Modern History in 1984.

While Richard was in England studying, his brother Martin was in Finland working a job as a photojournalist. Martin decided on a whim to pay his younger brother a visit in Oxford, and the two spent five days drinking and fighting—before the elder Flanagan went back to Melbourne. Martin handed the roll of photographs to his editor at The Age, expecting to see the developed pictures of scenic Finland he had taken.

When the pictures were returned to him, the scenic shots of Finland were there—interspersed among a dozen or so shots of Martin Flanagan’s unconscious, naked body, which was covered in blue marker drawings of “what looked like ancient pagan symbols.”

Richard Flanagan cleared his throat and looked out at the audience.

“I do not come out of a literary tradition,” he began, a stillness settling over the room.

“I come from a tiny mining town in the rainforest in an island at the end of the world. My grandparents were illiterate, and I never expected to stand here before you in this grand hall—in London, as a writer being so honored.”

Flanagan paid homage to his fellow finalists, calling the victory “not mine, but ours.”

The Narrow Road to the Deep North was written six times before its ultimate publication. Each draft was not only deleted, but—quite literally—burned.

“Yep, I often lit the barbie with the old drafts,” Flanagan jokes. “By burning them, I had to start over anew…when you bring the old back in, it’s dripping with gangrene—you have to have it all gone.” On the sixth attempt, twelve years after beginning, Flanagan found a form that worked.

Flanagan authored four non-fiction books before making the fateful move to fiction. Flanagan refers to this period of his life as his “great apprenticeship.” His first book, A Terrible Beauty: History of the Gordon River Country, was published in 1985. Flanagan was twenty-four years old.

In 1991, at thirty years old, Flanagan ghostwrote an autobiography of John Friedrich—Australia’s greatest con man—in six weeks. He used the money to finance the writing of his first novel, Death of a River Guide, which was published in 1994. 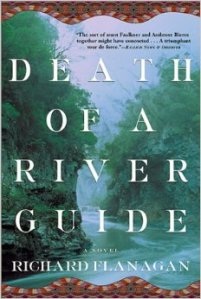 Three years later, he followed that up with his second novel, The Sound of One Hand Clapping, which became a major bestseller in Australia—garnering him praise from literary critics.

Flanagan wrote three more novels between 1997 and 2013—including the widely praised Gould’s Book of Fish. Despite his burgeoning reputation within the literary community, commercially his books were largely unsuccessful. The Booker Prize, and the £50,000 prize money, were a welcome surprise for the Tasmanian.

Traditionally, Booker winners give a flippant answer when asked what they plan to do with the money. Hilary Mantel joked that she would spend her winnings on “sex, drugs, and rock ‘n’ roll.” But Flanagan, now fifty three years old, was serious.

Flanagan said that he would use his money to do what everyone else does with money: live.

“I’m not a wealthy man,” he said. “In essence, this [money] means I can continue to write. A  year-and-a-half ago when I finished this book, I was contemplating going to get what work I could in the mines in far northern Australia because things had come to such a pass with my writing. I had spent so long on this book.”

The week following his Booker victory, Flanagan sold over $200,000 worth of books—eclipsing his combined sales for the previous decade in seven days. Flanagan narrowly avoided a life down the mines.

In The Narrow Road to the Deep North, protagonist Dorrigo Evans professes a deep love for books.

“A good book leaves you wanting to reread the book. A great book compels you to reread your own soul.”

If ever there was ever a book that compels readers to reread their own souls, it is The Narrow Road to the Deep North by Richard Flanagan. A modern masterpiece that should be on everyone’s reading list.